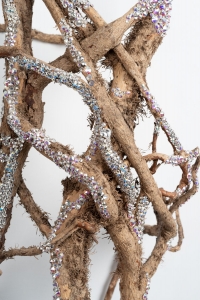 You embark upon a journey when you enter the world of Irina Rasquinet. Irina is a multifaceted artist who explores all the materials that she lays her hands upon to create rich and prolific realms. She is a painter and sculptor working with fabric, mesh and wood. She invents sculptured objects that draw from childhood and surrealism. Irina is one of those artists who cannot be confined to one genre. That is her strength. It is striking to see how her creations call for a broad range of media from beads to crystals and toys, etc. Sticking, overlaying, clumping together, decorating with ribbons, assembling, entangling and pinning materials that a priori are not related, she breaks down boundaries and glides from one practice to another at the whim of what she wishes to express.

Irina Rasquinet knows all too well what uprooting is, she comes from Chechnya and fled the war when she was studying fine arts. She knows what it’s like to arrive in another country knowing nothing about it. She knows what it is to save her skin. Incidentally she creates skins. She sews clothes, enjoying the French expressions that she gradually encounters along the way. She explores, delves into the French language and her creations enable her to emphasise what touches her, makes her laugh or moves her in our language. Upon arrival she made herself a dress coat with chicken bones around the idea of saving her skin, of having skin on her bones, on her back…This dress, if she still had it, was one of her first works. Bones were at the heart of it, followed by the framework, our skeleton, underpinning the start of the work: beginnings.

Irina Rasquinet presents us with her Prémices (Beginnings) for her first exhibition at Galerie Virginie Louvet. When she arrived in 1999, she got caught up in the storm of December, damage from which can still be seen today in certain regions. She picked up hundreds of branches that she kept. She captures their beauty and lightness by adding crystals that delineate the curved branches, and emphasise their characteristics.  Her branches or rather sculptural paintings take centre stage on the gallery walls, painted in warm colours reflecting the walls of the artist’s own studio. Her creations also evoke chandeliers, a nod to the world of Cocteau. Irina Rasquinet is good at what she does and anything she gets her hands upon rises from the ashes revitalising items such as dead branches, a tin can, a disjointed robot, a damaged spoon and an empty snail shell, poetic objects as such. In the centre there is a comical papier-mâché chandelier from which roses, tins, tops and lighters spout on which plants and crystals are budding. This cascade of paper evokes destitution and poverty, questioning our ability to deal with reality. It also conveys decline. Its ramifications echo our urban life that is all too often devoid of meaning. Recuperating, transforming and diverting waste as well as everyday objects to pave the way to the imagination, recycling in its purest form. The window installation has been produced using seeds, some of which are set with crystals. To join them together Irina Rasquinet has woven, like a spider’s web, braided cotton threads in which she embeds the hands of dolls. The artist also presents us with two sets of chimeras embroidered with pearls. The tail of one of these imagined animals is none other than a video output jack. Unexpected, imagined scenarios challenge us to reflect and often laugh about this confused reality in which we live.

Born in 1974 in Northern Caucasus, Irina Rasquinet lives and works in Paris, France.

Ingrid Pux is an independent exhibition curator. She conceives artistic collaborations and exhibitions for renowned brands such as Dior and BIC. In parallel, she works on the development of companies and private collectors’ contemporary art collections. She managed exhibition spaces such as the Louis Vuitton Cultural Space in Paris and Tokyo. Recently she curated the exhibition Jardinons les Possibles at the Grandes Serres de Pantin for the Nuit Blanche, bringing together fifty artists from the French art scene.

You can find out more about which cookies we are using or switch them off in settings.

This website uses cookies so that we can provide you with the best user experience possible. Cookie information is stored in your browser and performs functions such as recognising you when you return to our website and helping our team to understand which sections of the website you find most interesting and useful.

Strictly Necessary Cookie should be enabled at all times so that we can save your preferences for cookie settings.

If you disable this cookie, we will not be able to save your preferences. This means that every time you visit this website you will need to enable or disable cookies again.