I PREFER TO LOOK BACK

I PREFER TO LOOK BACK 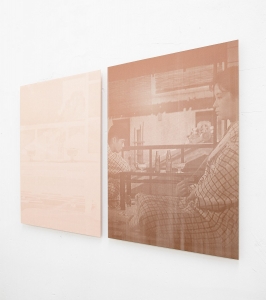 I Prefer to Look Back

As Francesco Casetti suggests, the question must be not only the Bazinian “What is cinema?” but also the radically anti-essentialist “Where is cinema?“

The work of Javier M. Rodríguez focuses on understanding the image-movement as alanguage and questioning where this expression can exist by means of translation and borrowing content from cinema he highlights flexible nature of film narrative. For his first solo show at the gallery, “I Prefer to Look Back ”, the artist presents a body of work based on the principles of film montage such as scene transitions, continuity, and camera movements.

In I’ll Be There  (2019), Rodríguez reproduces an image from Yasujiro Ozu’s film Early Summer (1951) with a technique commonly employed by the artist where a photo is printed using translucent lacquer as a negative in glass coated with silver, thereby one area of the metal is covered while the rest is untouched, ultimately it resembles a mirror. Due to the natural qualities of the silver and over time the uncovered area will eventually oxidize and darken, slowly revealing a monochrome image.

In a similar fashion but with shiny copper plates rather than silver, Penny for your Thoughts (2019) is a diptych representing two scenes from another film by Ozu. This time one of the images is barely visible (left) while the other (right) is very clear. An image will develop fully on the former within five years, while the reverse will happen on the latter, the image will disappear over time due to oxidation. Through both of these works of art, along with all the other pieces in the exhibition, movement is created with the use of images from such filmmakers as Antonioni, Bergman or Tarkovsky, not by the cinematic device but from a chemical process.

This formal exploration with materials allows Rodríguez to construct personal narratives from the borrowed content or in his own words “to create brief stories ”. From point A to point B a time trajectory resides within each work and a simple plot is established, like Ozu’s classical montage, characters may leave the scene but the empty frame is not devoid from action, it is replaced with the contemplative gaze of the public. In these successive practices based around time Rodríguez constantly reminds us that a new materiality for the media is indeed feasible.

You can find out more about which cookies we are using or switch them off in settings.

This website uses cookies so that we can provide you with the best user experience possible. Cookie information is stored in your browser and performs functions such as recognising you when you return to our website and helping our team to understand which sections of the website you find most interesting and useful.

Strictly Necessary Cookie should be enabled at all times so that we can save your preferences for cookie settings.

If you disable this cookie, we will not be able to save your preferences. This means that every time you visit this website you will need to enable or disable cookies again.